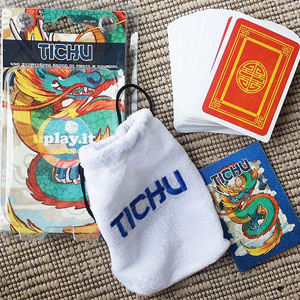 Tichu is the evolution of traditional Chinese games and one of the most famous “climbing card games” of the world, being able to entertain people of every age. From the awesome pencil of Kerri Aitken comes this new Italian edition. 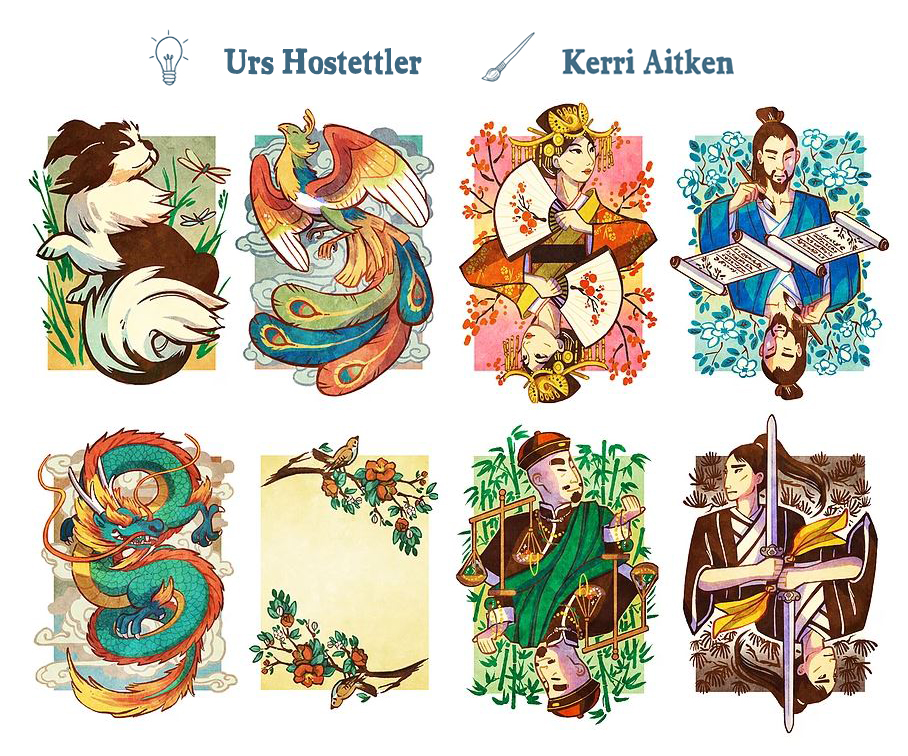 Thichu is a “climbing card game”, so a game in which players play combinations of cards and who wins the trick takes all the cards played during the same round.
It is the evolution of Chinese popular games sharing the main concept that only some cards give points. However Tichu introduces four special cards to replace standard jokers. Moreover, Tichu exalts the concept of team play as well, and only a clever team coordination, combining strategy and psychology, will bring to the victory.

The game has been designed mainly for four players (two couples), but it can also be played by three players (adding the “dead” player) or by six (two teams of three players each).
Tichu is played over multiple rounds. In each one you will try to get rid of your cards before your opponents do while trying to score as many points as possible. Round after round, your goal is to reach a total of at least 1000 points.
At the beginning of every round, hand out all the cards to the players. Then, in a four player game, pass 3 of your cards to the other players, one to your teammate and the others to the opponents. One at the time, the players will have to play a combination of cards, that can be a single card, a pair, a series of consecutive pairs, a three of a kind, a straight made of 5 or more cards, a full house, a poker, or a royal flush. You always have to beat who played before and, if you can’t, you have to pass. For instance, if the last cards played are a pair of 4 and it is your turn, you have to play at least a pair of 5. When all the players pass, the trick is over and a new one start. Whoever played the highest value combination wins the trick and takes all the cards played on the table. Also, to win the trick you may play the powerful Bombs (pokers or royal flushes) that defeat every other combination in play, or carefully use the special cards: the Phoenix, the Dragon, the Ma-Johng, and the Dog.
The round ends immediately when one only player has cards left in his hand. Then both teams count the points they are going to earn (putting together your and your teammate cards): 5s will worth 5 points each, 10s and Ks will worth 10 points each, the Dragon will worth 25 points, and the Phoenix will make you lose 25 points. In the case that a team is able to run out of cards before both of their opponents, it gets 200 points without even counting the cards. Add the points scored by your team to the ones earned in the previous rounds. When a team reach (or pass) a total of 1000 points, it wins.