Brethren of the Coast 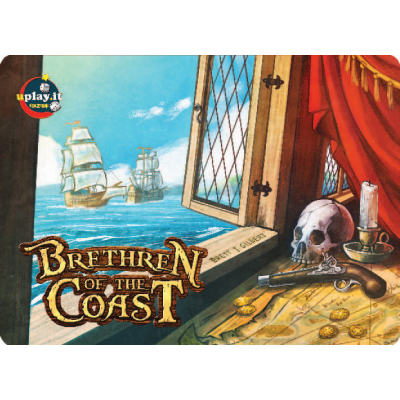 You are the Brethren of the Coast, buccaneers of the Caribbean, with only one goal: to attack the Spanish fleet and to split the conquered gold. The brethren may have a code, but you are pirates, after all! Together you will defeat the Spanish, but only one pirate captain will win the day!

End of XVII Century. The Brethren of the Coast, Caribbean’s buccaneers, are working all together to attack Spanish ships and territories and to follow the orders of the English Crown.
In Brethren of the Coast every player is the chief of a fleet of galleons and schooners and he must cooperate with the other buccaneers’ fleets to conquer and to split the Spanish loot. The split of the loot will happen in an equal way, as written in the Brethren’s code, but only the captain who will come back to Port Royal with the most doubloons will obtain the respect of the other members of the Brethren.

Brethren of the Coast is a 2 to 5 players game, in which the winner is the one who gains the most doubloons.
During your turn, you will play a new ship card next to a Spanish galleon, for trying to obtain the majority and, next to a different galleon, you will play one of your 4 that you have in your hand, face down, or face up at the cost of 1 doubloon, that will go to form the loot.
As you play the sixth card next to a galleon, you will trigger a fight and the loot will be revealed and split among those who will have their ship there.
However, you must be careful, because in the loot you won’t find just doubloons and treasures, but cannons and muskets too, that are gonna destroy some of your ships.
Keep going until you will have played all your ships and all your cards. Then split Port Royal’s doubloons and count your own loot. If it is bigger than the other players’ one, you win the game and the honor. If you have lost, don’t cry… you’re still a Caribbean’s buccaneer!